Home » Blog Travel Tours Blog- Here you can find all our articles! » Let’s celebrate San Isidro in Madrid together 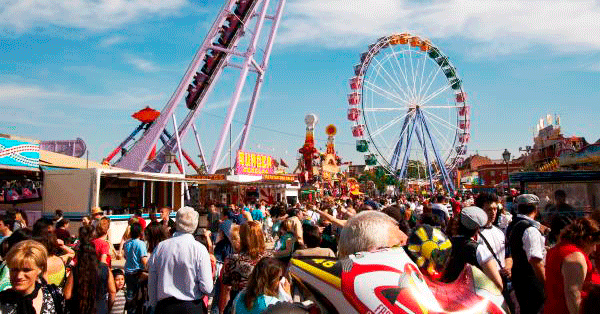 Every year in mid-May we celebrate with shows and music the festival of San Isidro in Madrid. For several days, the Spanish capital dresses in traditional outfits to celebrate its Patron Saint Isidro, known as San Isidro Labrador. There are endless scenarios and activities for all audiences. The best known is the “Pradera of San Isidro”, in the district of Carabanchel.

Origins of the Celebrations:

The legend says that San Isidro Labrador made sprouts a spring of water with curative powers after hitting a rock with his rod, while working the fields of his boss Ivan de Vargas.

The hermitage of San Isidro was constructed in the same place in the neighborhood of Carabanchel. Nowadays the faithful continue attending in pilgrimage to drink the water that comes from this source, especially in May.

Also the legend tells that even the emperor Carlos V and Felipe II were cured of terrible fevers with water from the fountain .

The local festivities,  illustrate the traces of their own social structure. They are the reflection of the cultural identity of a people and its tradition.

The tradition of the fiesta of San Isidro in Madrid consists basically of going to the prairie to eat the traditional “rosquillas de  anís”(anise pastries) and drinking water from the spring of the hermitage.

There are 4 types of “rosquillas” to choose from: the “smart ones” (with egg and covered with sugar glaze), the “foolish one” (with egg), French (with almonds) and Santa Clara (with a layer of white meringue) .

Madrilenian lemonade has chopped fruit (usually apple), sugar, lemon and wine (to give it a special touch).

Many Madridians (and those who are not from Madrid) go out to the party dressed in the traditional outfits of Chulapos and Chulapas, the typical costume of Madrid since the late nineteenth century. 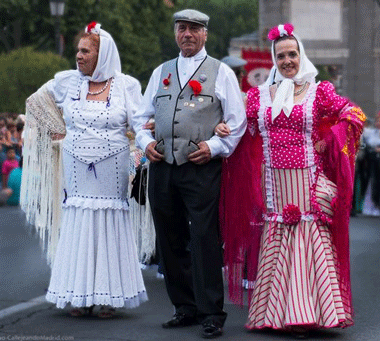 The chulapas have their hair pulled up in a bun and are dressed in a dress that is fitted above the knee and has a half-layered steering wheel to cover the ankle. The dresses are usually polka dots, but also with other printed, plain or plaid. As accessories, they usually put a handkerchief over their heads (with two red carnations) tied around their necks and a Manila mantle with many fringes.

The Chulapos wear a short vest with a red carnation on the lapel, dark and tight pants, cap with small black squares and white neckerchief.

WHAT TO DO IN MADRID